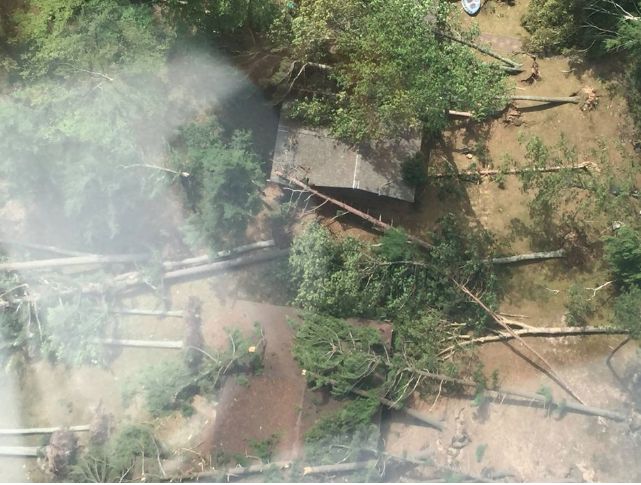 Bringing 100-mph winds and dramatic cloud formations, a major storm rolled through the Grand Traverse region on August 2, 2015. Seen from Elk Rapids to Empire, it was Glen Arbor that bore the brunt of the 10-hour event—the result of four storms that intensified as they crossed over northern Michigan. The power of straight-line winds flattened thousands of trees, including many over 100 years old, and brought rain and baseball-sized hail. All roads into Glen Arbor were impassible for several days, with area residents losing electricity from downed power lines. Though visitors stuck on the Dune Climb reported pelting sand that felt like “a million needles,” no loss of life resulted from the Storm of 2015.

The first severe thunderstorm warning was issued at 10:34 a.m., with 27 additional warnings issued prior to the last warning at 8:00 p.m. Warm, unstable air was backed by a cold front and resulted in the powerful winds that exceeded 70 mph across a large area.

The worst weather arrived after 4 p.m. and stretched from the Grand Traverse region to Manistee and inland to Grayling/ West Branch. There were multiple rounds of severe weather and two people were struck by lightning. Record 4.25” hail was reported near West Branch.

The Sleeping Bear Dunes National Lakeshore’s Alligator Hill Trail was one of the hardest hit areas in the park, with trails not reopening to the public until nearly a year later, in June 2016. Staff at the park estimated it would take decades for the damaged parts of the forest to regrow. Overall, the Storm of 2015 was the strongest ever to hit Leelanau County since record-keeping began in 1950.

Glen Arbor firefighter, Nate Perdue, remembers August 2 and the days that followed as filled with responding to hundreds of calls from area residents regarding downed power lines and trees. The township hall was set up as an emergency operations center, with roads blocked and no electrical power for days.

“We went door-to-door to make sure residents were okay and did house surveys for damage,” he recalls. The Glen Arbor Fire Department made 191 runs that first night to calls for help, that’s almost half of all the 398 runs we made in 2015.

“As the story of the great summer storm of 2015 has been publicized by the national media, many people have reached out with a desire to help,” said Bob Sutherland.

Many Glen Lake residents found themselves stranded in their homes while others had difficulty returning to the area. That was the case for Tamarack Cove resident, Sumner Bagby. He was in Florida when the storm hit and flew home to be with his wife, Irene, on Tuesday. He made it, driving a long, circuitous route due to impassable roads. After shopping for needed groceries the next day, his return route was blocked again when Consumers Energy closed the roads due to downed electrical lines and trees. Luckily, a neighbor on Fisher Lake offered a solution, ferrying Sumner and his groceries home by pontoon.