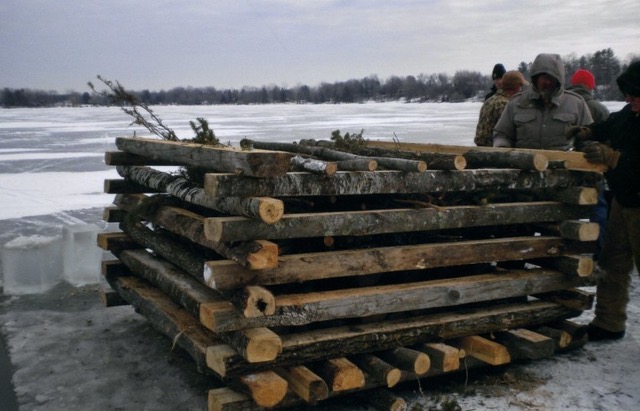 Noted in the minutes from a GLA meeting in 1949, the association’s fishing committee was asked if something could be done to improve the fishing for smaller fish, such as perch and bass on Big Glen. The south shore of Big Glen from Hatlem Creek to Dunns Farm was to be the targeted area.

The GLA fishing committee approached the Michigan Conservation Department and discovered they had a method designed to enhance fish habitats. It involved installing underwater structures that provided more cover for smaller fish and improved their spawning environment. Called fish cribs, they were generally placed just beyond the drop off in 14-16 feet of water and were assembled using saplings from state land. Larger saplings were used to construct 12 foot-square frames with many smaller saplings woven into and around these frames. This gave the crib the appearance of a large brush pile. Cement blocks were attached at the four corners of the frames to facilitate the submergence and anchoring of the crib to the bottom of the lake.

The Conservation Dept. supplied a boat designed to allow each crib to be built on the bow and then moved out to the drop sites. The cribs were placed at four locations. The first location was east of the Hatlem Creek outlet, the second was at the public access on Agnew St. and the third was at the public access on Division St., both in Burdickville. The fourth was off the Old Settlers Picnic grounds.

There were four cribs set at each of the four locations and each location was marked with a cedar pole anchored to the bottom. These markers helped the public find the favored fishing spots. This project was initiated and completed in the early 50s. The first winter following the installation of the cribs, shanties began to show up over these locations.

The next summer saw a definite improvement in the fishing on the south shore of Big Glen. In fact, the Maple Croft Resort in Burdickville began the tradition of having a fish fry every Wednesday night during the months of July and August. Fishing became more popular with the kids because they didn’t have to go looking for the fish. They knew there were fish just off the beach hiding in the cribs. There were certain activities that were must for every family that came to Glen Lake, whether there were renter or owner and activities that where mandatory every summer. 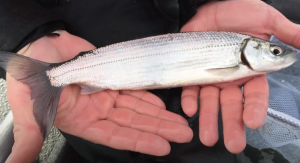 To mention a few they would have to start with multiple visits to the dune climb, canoeing the Crystal River, shopping for souvenirs at the Totem Shop in Glen Arbor, and of course, fishing for a nice string of perch to supplement a breakfast of bacon and eggs. The fish cribs have disappeared and some say the fishing is not the same on the
south shore of Big Glen.

But the memories last forever for those who knew the real reason the fish were biting.