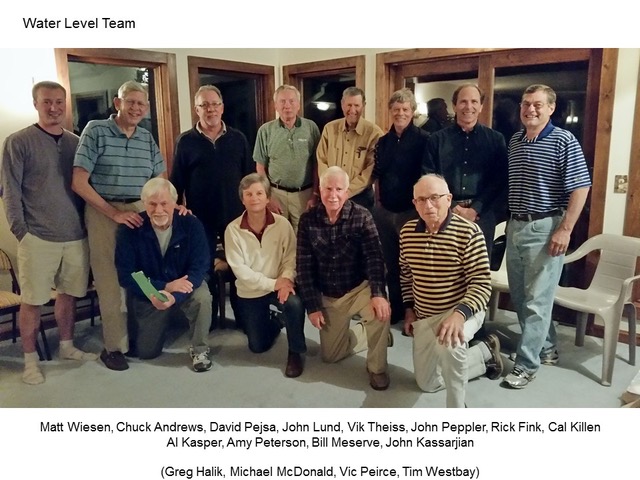 Settling the Controversy of Lake Levels

Prior to 1945, the subject of lake levels had already become controversial and needed clarifying. After a canvass of frontage owners, it was agreed to put the subject before the county court as to what the “legal level” of the lake should be. Papers were first filed in late 1940 and testimony was closed on Jan. 4, 1941. Serious delays prompted a letter to GLA from judge Parm C. Gilbert on Aug 9, 1944, expressing concern that nothing definite had been accomplished and a conclusion was needed.

Authority was originally given to the county surveyor of Leelanau to record levels no later than June 1 of each year and once a month during July, August, September and October, with a report filed with the county clerk. If the level was higher than the decree, owners of the dam would be notified with a request that necessary steps be taken to correct. There were 3 boards at the dam – remove one and the lake level was lowered, return one and the lake level was raised. No boards could be placed in the dam prior to May 1. All boards were to be removed a week after Labor Day to lower the level of the lake for the winter to help prevent ice damage to the shoreline.

This decreed level was higher than those advocating lower water had preferred. Up to this time their shorelines had suffered, trees had been destroyed, and sand beaches no longer existed. They had the same dock and boat handling problems as others. In the interest of harmony, all interested parties seemed willing to make necessary concessions with the expectation that the level established by the court would be observed.

In the meantime, a group of frontage owners, mostly summer residents, had purchased the dam, seeking to control the water level in accord with the court decision. The purchasers incorporated as The Glen Lake Improvement Association. Almost immediately, the group tended to ignore and circumvent the court decree. This was evidenced by bulletins of the Glen Lake Association, which worked closely on some subjects with the association. Frontage owners remained divided into two camps, one advocating the disregard of the “judge’s level” in summer, and one that felt there should be strict adherence to the court’s terms. Historical records show that most damage occurred from the practice of putting in planks to raise the water above the legal level in summer in anticipation of possible drought.

In the spring of 1952, a member of the Improvement association ordered the maximum number of planks be put in the dam to build up the water level. It was a wet season and the level built up rapidly. No one was present to change planks promptly and high winds followed. On July 23, the lake reached a level over 11 inches above the “judge’s level.” As a result, large quantities of black shoreline dirt were washed into the lake. Trees and grassy banks were undermined and destroyed, causing irreparable damage. Lake water in affected areas remained black and dirty for some time. Many who had not been affected by excessive high water before now demanded that something be done to prevent any such recurrence.

Informal meetings ensued and the consensus found that due to the violation of the judge’s decree, suitable legal action was imperative. Attorneys were consulted and before starting any action it seemed appropriate to discuss the prospective move with officers of the Improvement association. They indicated no willingness to change the policy that was responsible for the damage and invited GLA to “go ahead” with a lawsuit. Shortly after the suit was filed, some talk revolved around compromise or settlement prior to court and conferences were held between attorneys and principals of both sides.

As a result­—and after the defendants admitted violating the original decree—a “consent decree” was was filed with the court. A compromise measure was reached, with both the Glen Lake Association and the Glen Lake Improvement Association appointing two members to administer the dam level. The four original members were Arthur Huey, Ove Jensen, John Dorsey and William Peppler. This committee served in the 1952–1953, and 1953–1954 seasons.

The need for these two organizations had often been questioned. The Glen Lake Improvement Association, which owned the dam, expressed a willingness to deed their property and transfer it and other assets including cash, to the Glen Lake Association. Thus being relieved of their responsibility, this became a matter of record, as indicated in the August 1954 minutes of GLA’s annual meeting. The transfer was agreed to in principle but was subject to some legal formalities, incorporation of the Glen Lake Association being one. GLA incorporated and on Sept 27, 1954 the court ordered a consent decree in which GLA agreed to use its best efforts to maintain the lake level in accordance with Judge Gilbert’s decree of July 23, 1945. Controlling the lake level was essentially turned over to the Glen Lake Association at that time.