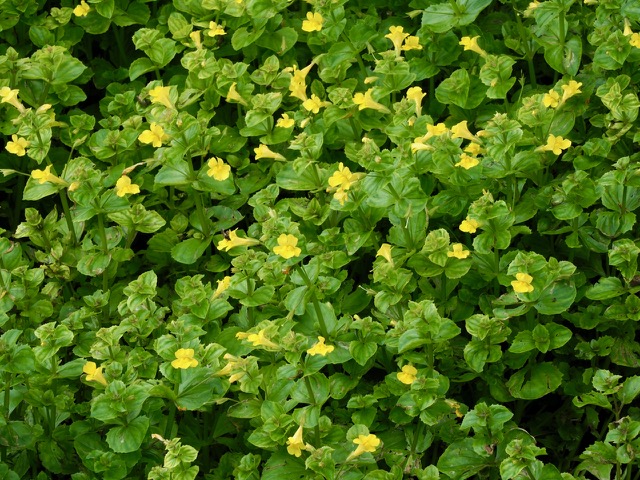 Monkeys at Glen Lake? Yes! However, the Glen Lake monkeys are not animals (nor are they a British singing group from the 1960s). They’re plants—very rare plants—a species called Michigan monkey-flower (Mimulus glabratus var. michiganensis, also known as MMF).

The Glen Lake Association, along with several property owners on the lake’s east shore and the Leelanau County Parks and Recreation Commission, are involved in what is now a two decades-long effort to restore, preserve and protect several Michigan monkey-flower colonies at the lake.

The story of the monkey-flower begins back in 1980, when botanist Dr. Joe Beitel from the New York Botanical Garden noticed a rather unusual leafy garnish on his dish at the restaurant that is now La Becasse. After dinner, he walked down to the shore of Glen Lake at Division Street and found the plant in full flower. He identified it as a variety of monkey-flower. He thought no more of it until two years later in the summer of 1982, when he met a student at the University of Michigan Biological Station who told him she was searching for the rare Michigan monkey-flower. Upon word of Dr. Beitel’s discovery, the student raced to Glen Lake where she was able to verify the existence of the monkey-flower. At that time, it was only the tenth known monkey-flower colony in the state of Michigan as well as the world!

In 1984, the existence of the rare monkey-flower played a key role in prohibiting the construction of a boat launch ramp where Division Street meets Glen Lake. Additionally, a petition was signed by 109 residents opposing the ramp, fearful that further development in this area would prompt the National Park Service to include Big Glen’s east shore in its land acquisition area. In 1990, the U.S. Fish and Wildlife Service determined the Michigan monkey-flower to be endangered and it remains the only plant in the state of Michigan to be listed under the Endangered Species Act.

Today, Glen Lake is one of only about 20 places on Earth where Michigan monkey-flowers grow. Those places range from Benzie and Leelanau counties in northwestern Lower Michigan, to Mackinac County in the eastern Upper Peninsula. The flowers also are ranked as “globally imperiled” by prestigious Nature Serve, the standard-bearer for conservation science. The rare flower also has the distinction of being Michigan’s only endemic plant—meaning it only grows here.

The flowers of MMF look somewhat like bright yellow snapdragons with red spots. Somebody thought the flowers resembled the face of a monkey and named the plant after the animal. The flowers, which appear at Glen Lake during the last week in June and usually last through July, stick up above the leaves, which often form dark green mats extending across the shoreline or along the edges of streams. These mats form because of the clonal nature of MMF. The plants reproduce vegetatively from lower stems, sometimes producing several hundred clones. This vegetative type of reproduction is one of the main reasons that MMF is able to survive. However, it does not produce seeds, with the exception of one small and threatened population in the Pellston vicinity. The inability to reproduce by seeds is one of the reasons the species is rare and why its long-term survival is problematic.

MMF also is rare because it has a strict set of conditions for existence. It grows in silty sand with roots in moving water, like spring-fed seeps, small streams, pools with flow-through, and shorelines near outlets. At least one of the aquifers that feeds the lake’s eastern shore extends all the way to M-72.  The water itself has to be very cold,  ranging from 47 to 62 degrees F.  Also, the water must be within the exceptionally narrow range for pH of 7.66 to 8.21. One of the biggest threats to the water characteristics on which MMF depends are groundwater disruptions for purposes ranging from residential building to road construction.

In addition, the monkey-flower has to compete for space and other resources with many other wetland plants. At Glen Lake,  invasive competitors include watercress (Nasturtium officinale), forget-me-nots (Myosotis scirpoides), peppermint (Mentha piperita), and jewelweed (Impatiens capensis). A particularly aggressive competitor is the highly noxious invasive species, Coltsfoot (Tissilago farfara), which has wiped out all other vegetation in many areas of the country and Canada. Because of the stiff competition from other plants, stewardship of MMF usually starts with removal of those competing plants. Coltsfoot, however, cannot be controlled by hand pulling. That is why the Glen Lake Association sponsors an extensive annual Coltsfoot monitoring program and provides technical assistance for eradication.

The Old Settlers MMF area can be viewed from the public viewing deck atop the park bluff not far from the historic chapel.