Zebra Mussels and the GLA 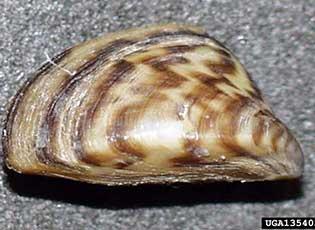 Zebra Mussels and the GLA

Zebra Mussels’ scientific name is dreissena polymorpha—a type of mollusk that is also a bivalve. This means they have two shells, or valves, a right side and a left side. The zebra mussel gets its name because of the dark, striped pattern on each valve. Usually the shell is a light tan color with zig-zag stripes. They average one to two inches in length, with a life span of four to five years.

Zebra Mussels are native to Russia but spread through Europe over the past two centuries. They were First observed in North America in 1988 in Lake St. Clair, it is thought they were brought from Europe in the release ballast water of transoceanic vessels.

Their habitat is freshwater lakes, rivers and reservoirs. They require hard substrates to latch onto, like rocks, clam shells or pipes. A mature female can produce up to 1 million eggs per season which hatch in the spring.

In 1993, the Glen Lake Association conducted a zebra mussel study of three sites; the Glen lakes, Lake Michigan in Glen Arbor, and Lake Michigan in Leland. This first sampling took place starting in early June and continued throughout July, with no veligers (juvenile stage) found in the Glen lakes. However, in an analysis of a larval collector removed on August 15, 1993, seven veligers were found. The collector had been in the water for two weeks, which indicated that the amount of veligers in Glen Lake was very small. Within a week, four other collectors were removed from Glen Lake water, with two of these four collectors also containing the zebra mussel veliger.

The GLA conducted these studies in 1992 and 1993 under the direction of Dr. Johnson, who generously gave his time, plankton nets, advice and support to the GLA.

The initial stage of management and control is prevention. The mussels came into our lakes prior to our boat wash operation, although it has been one of our priorities since. We have indeed cleared them off boats entering our lakes. We continue to use a high-pressure water system to knock them off boats and trailers when found, and they are collected and properly disposed of in garbage cans. Adult zebra mussels can survive out of water for four to five days. In addition, the launch crew keeps a close eye on the launch site and removes mussels in that area to help reduce the spread of
this prolific invasive.