It was Ottawa and Chippewa Indians who were the first to live near Glen Lake, where they farmed, fished and hunted. Simply referred to as “Glen Lake” it is actually comprised of two large bodies of water, Big Glen Lake and Little Glen Lake. They are connected by the channel at the Narrows and today, M22 runs between them. The lakes empty into Lake Michigan via the Crystal River.

Hydrologically similar, both lakes have nearly the same water level. Big Glen’s surface area is 4,871 acres and reaches a depth of 130 feet, while Little Glen covers 1,415 acres and has a maximum depth of 13 feet. At one point in time, the lakes were the same depth, but sand from the Sleeping Bear Dunes slowly filled in Little Glen.

Fur traders showed up in the 1800s and shipping on the Great Lakes grew around that time as well. The first settler built a trading post near the mouth of the Crystal River in 1847.

One of the early settlers wives, Mrs. John Fisher, arrived in 1854 and liked the grape vine-covered trees so much that she named the community “Glen Arbor.”

John Dorsey, who also arrived in 1854, was the town cooper and made fish barrels. He owned 1,000 acres on the north side of Glen Lake. About ten years later, in 1864, W.D. Burdick built a sawmill and gristmill at what is now Burdickville.

In 1886, D.H. Day bought large tracts of land and built a productive sawmill on Glen Lake. He replanted trees he had cut, planted fruit trees and built a cannery in Glen Haven, tirelessly promoting the area. In 1867, Glen Arbor Township had a population of 200, three docks, two hotels, four stores, a blacksmith shop and the cooper shop. Gordon Earle built a shingle mill in 1890 and J.O. Nessen built a steam-powered lumber mill in 1899. 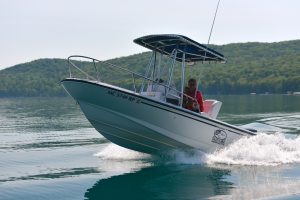 By the 1900s, tourism was taking off. A few resorts opened along the shores of Glen Lake and visitors — mostly from Chicago — would arrive in Glen Haven via steamship. Mothers and children would often stay the entire summer and men would come up for weekends. Glen Lake had two golf courses and an excursion boat that stopped at various resorts and cottages.

In 1901, a U.S. Life-Saving Station was established at Sleeping Bear Point and moved to Glen Haven in 1931. It is now the Maritime Museum at the Sleeping Bear Dunes National Lakeshore, which was created in 1971 and since been voted by the public as “The Most Beautiful Place in America.”

Currently celebrating 75 years in 2020, the GLA is committed to protecting the water quality of the Glens, which border the Sleeping Bear Dunes National Lakeshore, itself 50 years old!