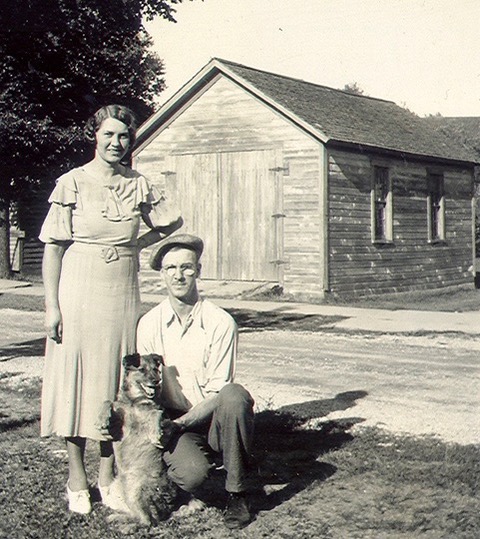 At left, the first fire shack on LaRue, with the Nowickis.

In the late 1940’s some members of the Glen Lake Association expressed concerns about fire protection in the Glen Lake area. Empire was the only village to have a fire department. In 1949, the village of Empire purchased its first two fire engines­–a pair of 1917 Seagraves from the Saginaw Fire Department. One engine was for fighting fires, the other was kept for parts. Prior to 1949, the Empire volunteers were using a pressurized water hydrant system that was purchased from the Village of Lake Ann after that community was devastated by a fire in 1895. The Empire Fire department used push/pull carts to carry the fire hoses to the hydrants as needed. It wasn’t until the early 1960s that the Village of Empire was able to acquire a fire truck that could exceed 35 mph. The new truck was a fully equipped 1956 Chevy.

The Village of Glen Arbor formed its fire department in 1951. Their first fire truck, acquired in 1956, was a converted school bus with a pump mounted on the front bumper. In 1964, the village was able to purchase its first fully equipped fire truck which was mounted on a 1948 International truck frame.

It was in the late 1940s that concerns about fire protection were raised. Dexter Seeburger was the chairman of the GLA Fire Protection Committee, as well as owner of Seeburgers Marina at the junction of Dunns Farm Road and Fisher Road. The plan was to build five sheds with a small fire trailer inside each of the sheds to supplement the existing fire protection.

The project went ahead due to Dexter Seeburger fabricating the trailers, which could be transported to a fire by car or truck with a trailer hitch. Unfortunately, the trailers were more suited for fighting wildfires than house fires. Trailers were equipped with shovels, brooms, and two hand pump water cans. There were 5 locations these sheds where spotted. At the Dune Climb, the south shore of Little Glen, Burdickville, Seeburgers Marina, and Glen Arbor. The trailers did not last beyond the 1950s, as the Village of Glen Arbor and Empire began to improve their fire-fighting capabilities. 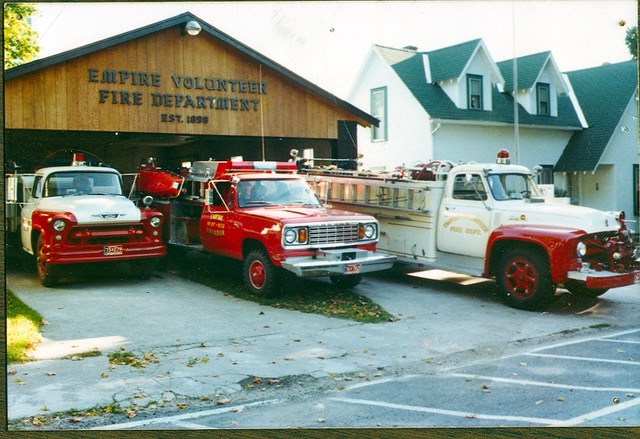 Today, Glen Arbor and Empire have combined their resources to form the Glen Lake Fire Department. We now benefit from a highly trained and well equipped, multi community fire department. This would not have been possible without the financial support of the very generous residents and the vision and effort of the past and present leadership of the fire departments in Glen Arbor and Empire.

A Personal Side Note:

John DePuy recalls a childhood story: As a young boy, John vacationed at Glen Lake every summer. His family drove from Cincinnati, Ohio towing a small trailer and boat. His dad happened to be driving past the Dune Climb one day when he was flagged down and asked to drive one of the fire trailers to a fire, due to his having a trailer hitch. Little did John know then that he would become the fire chief of the Glen Lake Fire Dept.