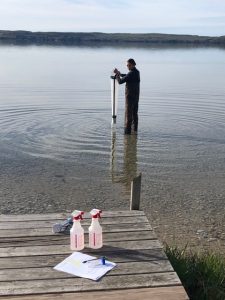 Last summer something very unexpected happened on Glen Lake. The number of Swimmer’s Itch cases far exceeded what was suppose to be a banner year for mostly a itch-free swimming experience.

Using a federal and state permit, in 2017 the GLA removed all broods of mergansers.That should have resulted in a significant reduction in Swimmer’s Itch in 2018. Granted, the very warm, sunny summer resulted in increased swim hours and may have contributed to increased itch. Consequently, a lake-wide increase in itch has prompted a scientific study to find out what is going on.

Glen Lake Association in conjunction with Lake Leelanau and Walloon Lake Associations are the three locations for a major Swimmer’s Itch research project that will be conducted by Freshwater Solutions, Inc.

Each lake association is staffed to have 5 volunteers from each lake collect 10 different water samples on the same day (Tuesdays) and the same timeframe (between 8 a.m. to 12 noon) May 21 to November 5, and from the same locations on the lake. Quick math indicates that is 15 volunteers working for 25 Tuesdays collecting 750 water samples.

The final results of this study will help us better understand the impact that migrating waterfowl have on itch severity, along with gaining a better understanding of what additional species of waterfowl besides the Common Mergansers are harboring itch-causing parasites and perhaps unknowingly contributing to increased Swimmer’s Itch risk.

Having removed all Common Merganser broods last summer, we are hoping for lake-wide reduction in itch this summer.

GLA will be sharing a summary report of this study for all three lakes by the beginning of 2020.