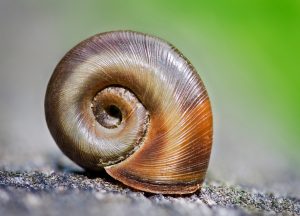 Helisoma, Ram’s Horn Snail is an aquatic host to the newly discovered parasite in Glen Lake.

It’s a rare occurrence when a new species is found! But that is exactly what scientists believe has occurred right in our backyard. After years of studying Glen Lake water ecology and organisms, we are now faced with the discovery of a new parasite that could be part of the Swimmer’s Itch life cycle.

A team of scientists with Freshwater Solutions, LLC (FWS) in partnership with the GLA have been working on Swimmer’s Itch in our lakes for decades. Up until the 2018 season, research had focused on the one species believed to be the primary offender in causing Swimmer’s Itch in Glen Lake. The accessibility and affordability of qPCR technology have for the first time made it possible and practical to determine if other previously overlooked parasites could also be contributing to Swimmer’s Itch and to what extent.

So, in 2018, a new approach was used to collect and count every possible itch-causing parasite from all species of snails present in Glen Lake. Predictably, they found the other known itch-causing parasites that are assumed to play a minor role in Swimmer’s Itch. However, a never-before-identified parasite showed up under a microscope. This discovery initially confused and
dumbfounded the FWS team. Was it a sub species? Was it actually one of the known parasite species? Or–most extraordinarily– was it a new species?

After isolating and preserving the unknown parasite, sending it to the University of Alberta for further
analysis, consulting with the University of New Mexico where there is a library of known parasites, and having the parasite analyzed at the genetic level, preliminary results suggest that we have a new schistosome species.

“More tests and checks will continue in the coming months but be prepared to hear more about the announcement to the world that on Glen Lake and other lakes in our region, a new scientific species has been discovered,” says watershed biologist, Rob Karner, who is very excited about the find. “Once the scientific paper that details this discovery is submitted for publication and is
accepted, the fun part will be what to name it,” says Karner.

Karner also commented that, “the discovery speaks to the level of energy and sophisticated scrutiny that GLA is getting from our collective efforts with FWS and the exceptional talent possessed by their team.” At this point, experts are not sure if this new parasite causes itch or which avian (duck) species it cycles through. Hopefully, it does not cause itch but preliminary analysis suggests that it is very closely related to the known parasites in Glen Lake that do.

In order to better understand these questions and more, additional research is already planned for summer 2019. Stay tuned for
updates as we gain better understanding of how this and other itch-causing parasites are impacting our lakes.

For more information on discovering a new species, check out these links.
Newfound Species.
These Are the Top 10 New Species Discovered Last Year.