More than 100 years ago, European settlers brought the elegant Mute Swan to North America, but the beautiful birds also proved to be aggressive and invasive.  By 1855 due to pressures from hunting, loss of habitat and competition from Mute Swans, the native Trumpeter Swans became extinct in Michigan. Fewer than 70 Trumpeter Swans were known to exist in the entire lower 48 by 1933.

By the end of the 20th century the Mute Swan was a fixture of our watershed, the Old Mill Pond, Brooks Lake, Tucker Lake, Fisher Lake, Hatlem Pond, even the Crystal River all had breeding pairs. Imagine seven or eight Mute Swan nests producing four to seven cygnets each year. That’s as many as 50 Mute Swans in our watershed alone!  With the invasive Mute Swan population rapidly rising, the Michigan Department of Natural Resources put a plan in place to slowly reduce the Mute Population by oiling eggs in the nest. This plan actually worked!  And the Mute Swan Population has been nearly eradicated.  But was there hope for a return of the native Trumpeter Swan?

In 2006 Sleeping Bear Dunes National Lakeshore in partnership with the Little River Band of Ottawa Indians, released 8 immature Trumpeter Swans in an undisclosed wetland location within the park in hopes of reestablishing a breeding population. Today, these swans and their descendants can be seen in and around the watershed with observations of at least two (and maybe more) nesting pairs on Hatlem Pond and Old Mill Pond. Our watershed isn’t alone in experiencing the successful rebound of the Trumpeter Swan, North American numbers as of 2010 were over 46,000!

So, the next time you are out in our watershed, celebrate the accomplishments of restoring our swan population to its rightful place. If you’re lucky, you might even hear the distinctive namesake call of our native swan. It was a close call, nearly a swan song, for the world’s heaviest bird capable of flight. We are fortunate indeed to still have this unique piece of our environmental orchestra in play!

*Special footnote, our watershed is also a temporary resting/stopping area for Tundra Swans which can be observed during their spring and fall migration on the western shoals of Big Glen numbering in the hundreds! 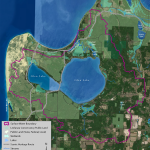