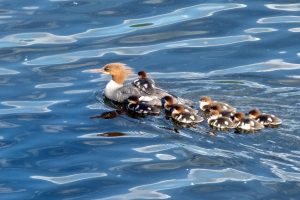 Yes! Our lakes are special but did you know that when it comes to Swimmer’s Itch, Glen Lake is not unique? Nearly all “up north” lakes have some form of the itch; in fact this is the case on a global scale. A well-documented ecological zone of itch-causing worms exists at or near the 45th parallel and not just across North America, but Europe as well. So what can we do?

Management to reduce itch remains an important part of our strategy. GLA removed record numbers of broods this year. 171 mergansers from 17 broods were relocated, while on other nearby lakes, there were zero to two broods. Why are our numbers so much higher than other lakes in the region? It may be that the great August storm of 2015 created an abundance of nesting habitat, making our watershed irresistible to merganser ducks. And we’ve continued to receive unprecedented reports of new broods into August! Is it possible that hens that evade capture with their chicks are capable of producing a second brood in a season? These highly intelligent and adaptable waterfowl continue to provide scientific mysteries to solve.

Even with our best efforts to control the issue, it is clear that parasites causing Swimmer’s Itch will continue to persist in the natural environment. Our ecosystem is more complex than we ever imagined. As of last year our research efforts identified six different worms (one was a newly-discovered species!) with 3 different host birds in our watershed alone. So what else have we learned and what can we do to avoid the unpleasant side effects of exposure? The snails that shed the itch-causing worms live on the bottom and need light to survive. In the ever clearer waters of our lakes they have been found in water up to 8 feet deep, so swim very deep! The light seeking worms are shed by snails in the morning, quickly moving to the surface where they hope to find their preferred bird host. Avoid swimming before noon! Preferably swimming after 4 pm when worm numbers will have dropped significantly. The worms concentrate in the upper 18-24 inches of water and are easily moved by wind. Do not enter the water if there is an onshore wind at your location. The wind can accumulate very high numbers of worms at the shore. Some swimmers have reported application of waterproof sunscreen or baby oil before entering the water and applying hand sanitizer and/or vigorously toweling off when leaving the water to be helpful. But not all worm species are created equal and given the wide variety of itch causing worms in our watershed these methods are only partially effective.

So after all that, what can you do if you still get “the itch”? Treat it just like you would an annoying batch of mosquito bites. Avoid scratching! Scratching or breaking open the skin will increase the itchy sensation, prolong recovery and can lead to a secondary skin infection. Use a topical itch relief product such as an ice pack or hydrocortisone cream, calamine lotion or other anti-itch cream. Take an
oral anti-histamine such as Benadryl for general itch relief. Remember that while in more severe cases the “spots” can remain visible for weeks, the itchy sensation should subside after a few days with no lasting effect. Take appropriate measures to “Swim Smart” and keep enjoying the water!